This little post marks the official launch of the SerSoc blog – a forum for bimonthly postings by members and friends interested in serendipity, a site for discussions, announcements and serendipitous connections to be made!

What began in August of 2016, in Halifax Canada, with a coffee date between two strangers who had, it turns out, a lot in common, came to fruition in September of 2019, in London England, with the first international conference of the Serendipity Society. The theme was broad, and we hoped to capture the nature of the impact the Society is having, with: ‘State of the Art: Serendipity as an Emerging Field of Research.’ Talks were as diverse as our membership, and there were many strong and interesting personalities in the room, just as I had hoped. Not having seen each other since that first meeting in person, Lori McCay-Peet and I, Samantha Copeland, were proud of what had become of our collaboration—the Society grew up, developing in ways we could not have predicted, and it presented to us now a potential we could not help but be excited about. Wendy Ross and Stephann Makri worked hard to make the event not only run smoothly, but developed a programme full of surprises. And on the last night, laughter and intense conversation ebbed and flowed with the natural rhythm of a conference well done. Plans are already in the works for more to come…

I want to take a few moments of your time to reflect on why I feel this event was momentous. Many of us in attendance are the only, or one of a few working on serendipity in our fields. We find overlaps with well-established bodies of literature and research directions often, but find ourselves unique in seeing the great potential of truly understanding phenomena like serendipity, luck, and coincidences – not just telling more stories about them, but looking closely at what they are really about, and

why they play such a constant and often influential role in our lives and science. I spoke at the conference about the increasing relevance of taking the role of chance, complexity and uncertainty seriously – as our world becomes less certain (or rather, as we increasing perceive the deep uncertainty that characterizes much of our world…), we have to get better at dealing with uncertainty.

My research focusses on how we can deal with uncertainty together, as members of communities, who are all affected by it in both similar and different ways. It is significant that we find serendipity research in psychology (developmental and cognitive), in information sciences, in computer science, in ethnography, that approaches can be empirical, philosophical, or anecdotal… Serendipity is everywhere. It is what we hope to get out of the chance encounters that we have all the time, in all sorts of ways, with all sorts of people, events, and things. It is the mark of success in a world marked by deep uncertainty. The better we understand serendipity, I believe, the better we understand a profound and profoundly underappreciated aspect of human nature and society. And dealing with uncertainty better is an aspect of ourselves we very much need to work on now.

As I have watched this Society grow, on its own, through the serendipitous development of networks and a growing interest worldwide in the phenomenon of serendipity and its impact on every aspect of our lives, from what we know about the world to what work we do every day, I have been amazed. Amazed that this sense I have about serendipity’s importance is not mine alone, but is shared by many. And amazed at the truly impressive body of work that has developed in the last decades, and particularly in the last few years, by an increasingly diverse and powerful group of researchers, entrepreneurs, managers, artists and activists. I am humbled to be at the center of this movement, and excited to see where it will take us all. 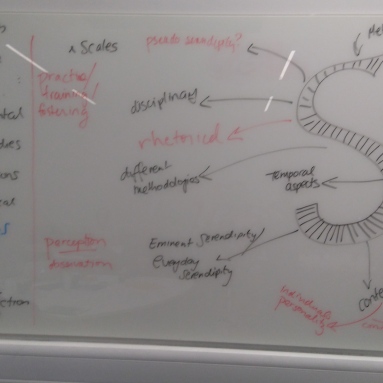 Where might we go from here?
The final brainstorming session results, from SerSoc19